After the civil war, slavery in the United States was abolished. But the Southern economy depended on slave labor, and white former masters were certainly not happily willing to accept their former slaves as new equals.

Neither slavery nor involuntary servitude, except as a punishment for crime whereof the party shall have been duly convicted, shall exist within the United States. . .

So slavery as punishment for crimes was still permitted. This loophole allowed it to continue.

Southern states passed laws that became known as Black Codes. These included vagrancy laws- any black person found to be unemployed could be arrested, fined, and then imprisoned and hired out for labor if unable to pay. 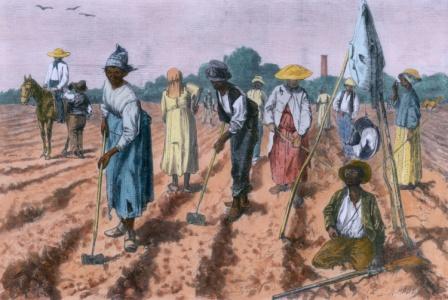 In 1865 Mississippi passed a law requiring blacks to have written evidence of employment for the coming year each January. If they left before the end of the contract, they would be forced to forfeit earlier wages and were subject to arrest. South Carolina prohibited blacks from holding any occupation other than farmer or servant unless they paid an annual tax. Black prisoners were hired out by the white sheriffs as planation laborers in conditions similar to what they had as slaves before.

If slavery can be used as punishment society can use criminal law for racial oppression.

Learn More about The Black Codes

An explanation of the Black Codes from History.com.

More on the Black Codes from Encyclopedia Brittanica.